Blog 20 Dumb Tweets and Twitter Fails to Make Your Day

20 Dumb Tweets and Twitter Fails to Make Your Day After so much educational and helpful content, we thought we all deserve some laughs. So in an effort to make your day, we rolled up our sleeves and searched the internet for dumb tweets that have us scratching our heads wondering: “How? How in the world did that make it on the internet?”

If you want to avoid all these faux-pas, we highly recommend you schedule your tweets in advance!

1. The ‘Did you just say that out loud’ IHOP Moment 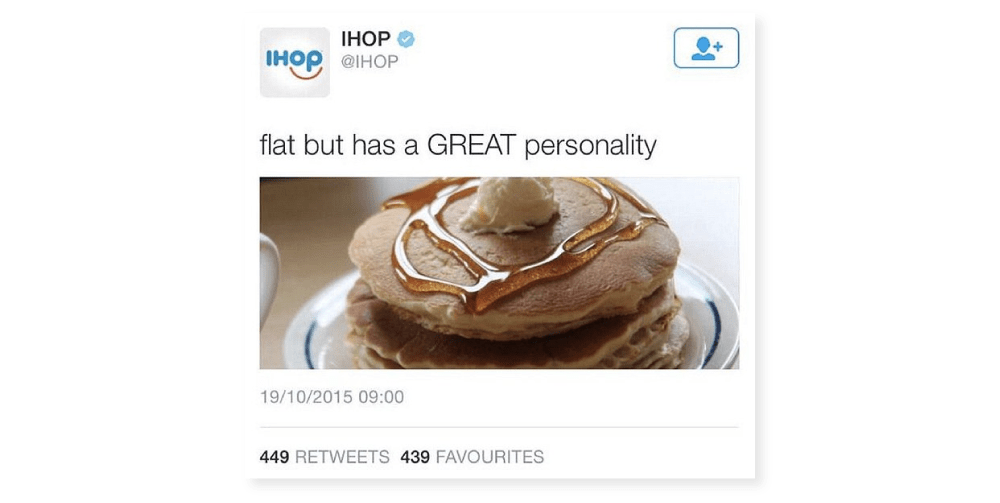 Kicking off our list of dumb tweets with a classic. We’re not entirely sure what the social media team from IHOP was thinking when they wrote this very inspired and ‘dude-like’ copy, but they hit the publish button.

We know they wanted to be hip & cool, but clearly, they tried a bit too much. What happened next is obvious—they fell flat on their GREAT face.

2. The one with the inappropriate landing Any quick writer knows – CMD-C-CMD-V sometimes disappoints. But, you should always check what pops up after the quick move. Especially if you’re tweeting for US Airways. And even more so if you’ve recently copied a particularly-inappropriate image. This easily went down in history as one of the dumbest tweets ever.

3. The employees who wouldn’t let go HMV apparently decided to gently let go of 190 employees… who wouldn’t go down without a fight. It was as if we were there because one particular employee took over @hmvtweets Twitter account and started live-streaming the event of “mass execution” as they call it.

Someone did step up to take the blame (or credit) for the ‘information campaign’. The whole ‘happy it’s Friday, miserable it’s Monday’ movement has been going on for quite a while now. People understand it, relate to it, and share it. But sometimes, they relate to it a little too much and they get just a bit too eager to share… with the wrong crowd.

One of my favorite stupid tweets is what happened to StubHub a long time ago. Good news is that most likely the miserable employee didn’t have to dread the following Monday.

5. The ‘Ronald vs Donald’ showdown

Apparently, McDonald’s Twitter account was hacked and this is how it happened. We’ve got to hand it to the hacker though, they were pretty inspired. McDonald’s being one of Trump’s favorite brands, they hit him where it hurts.

6. The one where MTV tries to be funny

During the Golden Globes, MTV decided they would try out a joke and claim they can’t understand Eva Longoria and America Ferrera without English subtitles. While there’s nothing wrong with a brand trying out the funny tone of voice, take another look at Wendy’s textbook.

I’m sorry MTV but you really didn’t think this one through. As a marketer myself, I understand, there are times where we’d do anything to link our brand to…well… anything. But hurricane Sandy was not one of those times, Gap. Not the time to encourage people to shop online. More likely, the time to try and help or let your social media be silent for a tiny bit. 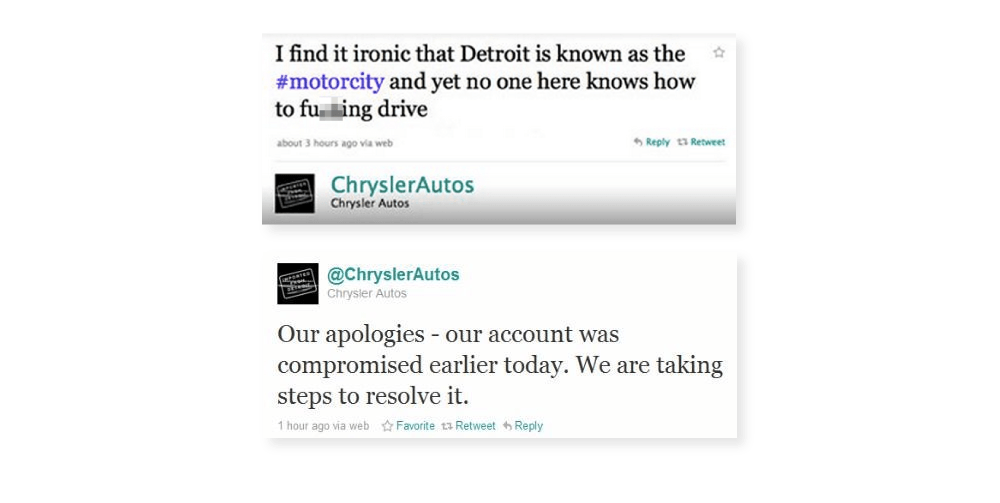 I find it ironic that Chrysler, a brand whose main interest is to make drivers love it, managed to offend the drivers of an ENTIRE city. Though the first statement was that their account was compromised, turns out an employee did it. An employee clearly upset by the commute.  Funny enough, back then, Chrysler was actually in the middle of a celebration campaign for Detroit

Luckily for them, we can’t blame them too much. Planable wasn’t around in 2011 to help them approve content, like this. 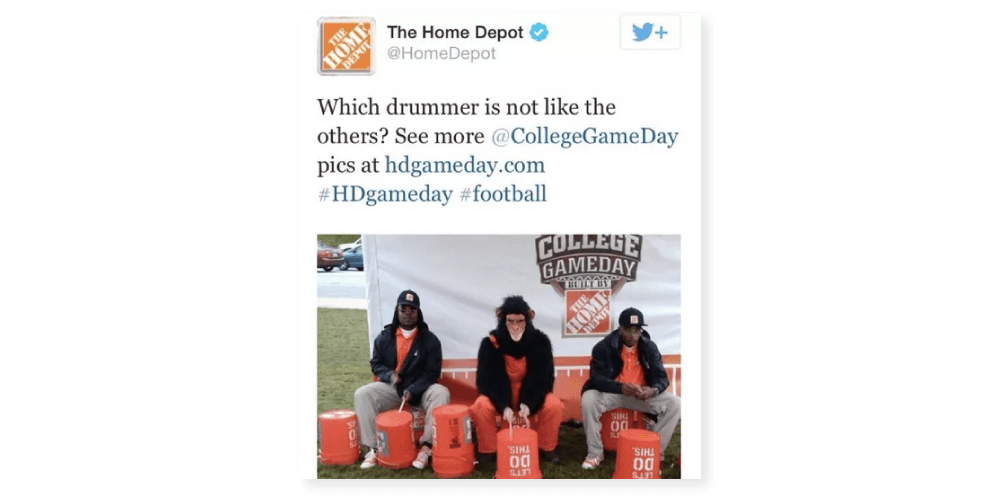 So someone from The Home Depot’s agency was either way too innocent or rather racist and decided to take a funny-not-funny poll on Twitter. These kinds of tweets really make you wonder – did the person pushing the publish button really didn’t see the backlash coming? Were they really that convinced that it would be funny? Not to sound redundant, but really, give Planable a try and tag a colleague in the comment.

Well NPR was really the first to report this crucial piece of news. We have to say, we’re happy NPR takes the responsibility of informing the public so seriously, but Ramona’s actions don’t really account for Breaking News. Bottom line, love the story, hope the cats are safe, #GetRamonaNewToys.

Intermission: Lessons to be learned

We had our laughs, but there are still some lessons to be drawn here. As funny as these incidents are, we’re social media managers as well and this kind of mistake could happen to anyone missing the proper process. In order to avoid social media crisis, any team should start with ticking these boxes:

Have a clear workflow

Firstly, make sure the entire team, agency, client, understands what the workflow is and how it will work. Map out the various parts of the process, like:

Employee autonomy is very important. But leaving all the social media responsibility to one person is a recipe for disaster. It’s not always necessary to have an entire team or a fixed approval process, but at least two pairs of eyes have to take a look before something goes live. We’re all prone to mistakes so ensure a second opinion.

Establish clear values in regards to your company and the content you put out. Employees and agencies have to know what your values are and how content should reflect that. It might seem obvious to you that you want to stay out of politics, always be politically correct, never post anything racist, sexist, or to any other community offensive. However, it doesn’t hurt to say it out loud or build guidelines that clearly state that.

Moving on to more dumb tweets…

As we’ve said in the beginning, we’re very quick to judge brands that make mistakes. And it’s true, they should know better. But from time to time, it’s good to remember that behind brands, there are people. And people aren’t perfect. Let’s take a moment to remember just how imperfect we are:

This particular human is scared of finding out she’d have triplets. And who can blame her? Would you want to carry three extra human beings for 27 full months? The math is there. You can’t argue simple math. We all know that every story has two sides, so you have to understand his point of view. It is the point of view of anyone opening a pizza upside down…

15. Celebrities are such liars

We’re so sick of these celebrities lying to us all the time. We’re not that oblivious you know? Anyone can open a map and figure out Beyonce’s lie, so try harder next time.

Ugh, the answer is so simple. We could’ve ended poverty a long time ago. But as always, people just don’t manage to come together for a common purpose.

17. Quarter has such vast meanings

Since the beginning of time philosophers debated the true meaning of a quarter. Is it a coin, is it the value of a coin? Or is it a random word we use to put in between other words? 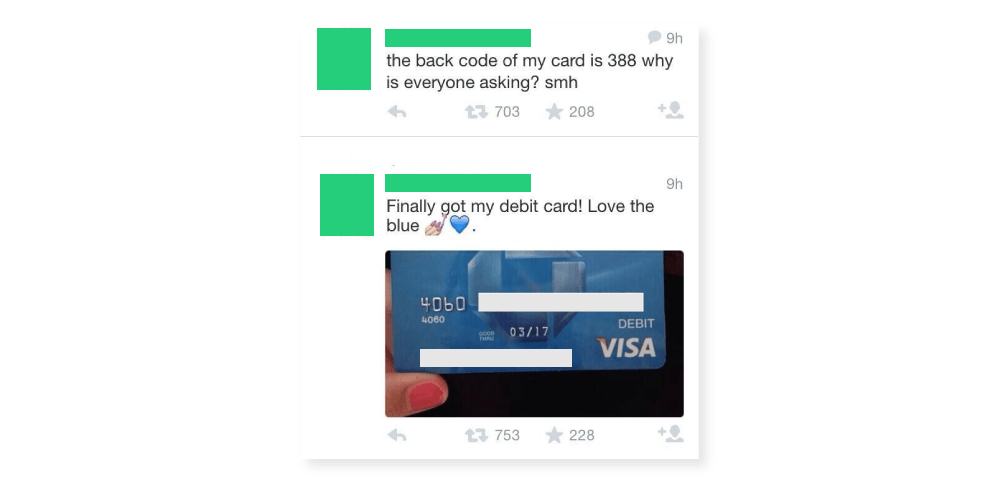 Don’t be so quick to judge, ok? She did just get her credit card. She did post a photo of it on Twitter. But did you ever stop to wonder if she actually wanted to give us all gifts? Who’s to say Santa’s an old man dressed in red?

There have been several rumors, however, that this one was fake. True or not, it appears that several people did this, so – group shopping.

There’s really no reason to judge here. We all know Europe is one country and all those cities are close to each other anyway. So who cares where the Eiffel Tower actually is? It’s in Europe!

20. Covfefe to all and to all covfefe

We couldn’t really finish this top without a small little tweet from Donald Trump himself. And this seemed like the perfect choice. The tweet that baffled the internet, the world and introduced a new word in our language: “covfefe”. The trick? It means what you want it to mean.

That’s it, folks. May your weekend be funny!